I’ve been trying to figure this one out for a while. I work very hard to create open, polite dialog between people who disagree. I’ve hosted conversations about wages, abortion, racism, sexism, homosexuality, religion, politics, gun control, police violence, healthcare, and the musical career of Michael Jackson. In all of those conversations I’ve notice that those with the most certainty and those who adhere most closely to the ideas of a given group often have the least to contribute to the dialog.

When we’re young, we’re pretty certain about the way the world works. Adults tell us the truth and we trust them. With no explanation or preamble adults tell children about the alphabet or math or the physical world and kids simply trust. But as children grow there is, inevitably, a point where that trust stops. It might be the discovery that Santa isn’t real (spoiler alert) or it might be the when the “bad” movie turns out to be pretty good after all. Whatever the point in our lives, we all come to it. We stop being completely certain and start being somewhat skeptical.

Some people continue on that journey. They run from certainty. They apply skepticism to everything. They question everyone, every time. There is no more certainty left (at least outside their own minds). There is no trust in what anyone else says, no matter what. These people are, functionally, as rare as someone who remains in a childlike state of certainty all the time. The rest of us live on a continuum between certainty and skepticism.

When we’re young we also think along with the group. We believe what our parents believe because we’re a part of our family group. Then we believe what our classmates believe because we’re a part of the class. Then the club or the team or the fraternity or the office or the political party or the religious group. We trade groups for groups and adopt the identities of each group as we go along.
Eventually we become individuals who pick and choose what from each group we want to take and what we want to leave. We take the beliefs of our parents that fit with our new identity and eschew those that contradict it. We do the same with school and friends and work and politics and religion.
But some people tend more toward the group-think side of the continuum while others move toward the individualism side. For some people any questioning of the group’s beliefs is the same as questioning their own. For others no group can tell them what to think or what to believe. 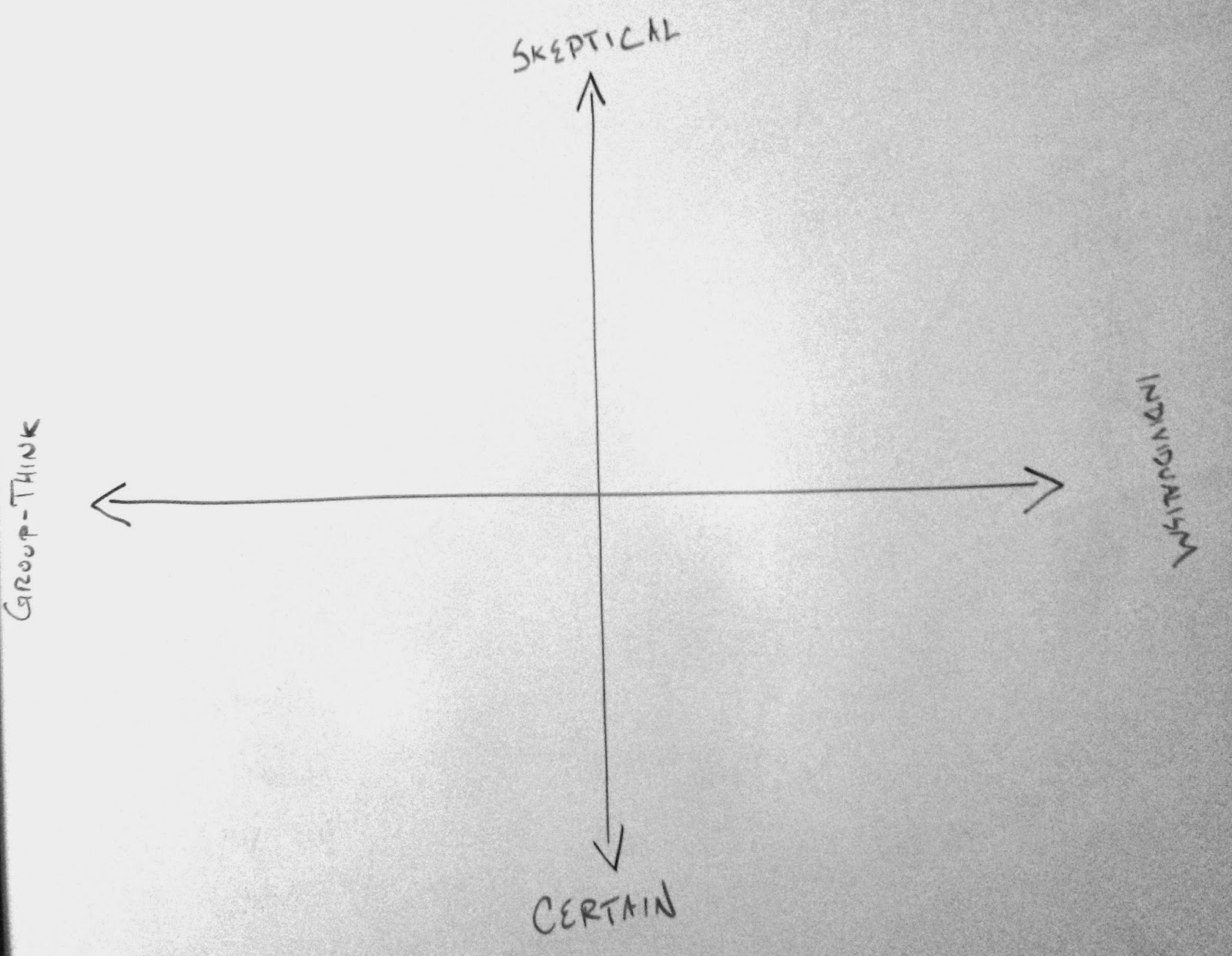 An individualistic skeptic (IS) trying to have a conversation with a group-thinking certain (GC) person will, almost inevitably be frustrated. The IS will want to examine each idea, pick it apart, and try to come up with better solutions while the GC will want to defend the ideas of the group and won’t brook any critique of the concepts which they hold dear.

It’s not unlike the difference between those who go all out celebrating Christmas and those who don’t. Often the all-out celebrators do it from a sense of tradition and belonging. They treasure the ideas of Christmas from their families and want to continue to celebrate that past. Those who don’t celebrate Christmas may wonder what the fuss is about or decide that the holiday doesn’t mean much to them. But if they were to have a conversation about their practice they would be speaking different languages to each other.

The IS would be speaking the language of functionality, usefulness, and personal preference. The GC would be speaking the language of tradition, history, and what’s best for the world.
When we approach dialog from such different perspectives we aren’t likely to make much progress and we’re very likely to be frustrated. Really frustrated, like political conversation on Facebook frustrated.

Since there are four quadrants to the continuum that gives us four basic types of attitudes we’ll encounter in our dialogs. The reality is that people will be a mix of everything and that mix might change from topic to topic, but we can use the basic archetypes to help understand why people respond the way they do to a given conversation.

The GS adheres strongly to the beliefs of one or more groups to which they belong while being highly skeptical of ideas from other groups. The GS chose their group based on careful deliberation and is often in a group that is at odds with the one in which they grew up. The tendency toward group-think means that others are categorized by their own group and the skepticism means that those groups deemed to be wrong by any part are, on the whole, dismissed from consideration. When talking to a GS you need to do your best to understand the group with which they identify and speak from within that group’s ideas rather than attacking the group from the outside.

The GC is highly aligned with the group to which they belong but tend to ignore ideas from other groups. The GC has often stayed in the group in which they grew up and accepted it based on tradition and history. The certainty of a GC means that most critiques are easily dismissed as coming from an outsider, but the dismissal comes more from the trust in tradition than from the evaluation of the ideas. When talking with a GC root your conversation firmly within the tradition that they hold dear and work to show them how their tradition affirms the point that you’re trying to make. Any points that contradict the GC’s tradition will be summarily dismissed.

The IS is a lone wolf type that will pick and choose ideas based upon their own internal criteria. They may take the ideas of different religions or political parties based on their utility rather than their adherence to a group’s beliefs. The individualism leads to a rejection of group control over ideas – often connected to a rejection of religion or political party or ideology. The skepticism roots the individualism in the process of review based on a set of criteria like logic or functionality. When having a conversation with an IS it is most important to find the basis of skepticism and couch statements according to that ideal. So if the IS uses logic for their review process, you too must use logic to converse with them. Find the base assumptions that drive the skepticism and begin there before working to your point.

The IC believes what they believe even if it contradicts a group or skeptical thought. They are often driven by emotion as the basis of their certainty since neither a group or a skeptical process guide them in evaluating information. They may reject the group-think for a real or perceived emotional slight from the group, but they don’t want to give up all the beliefs of that group. They reject skepticism as being too cold and calculating to deal with the wonders of life. When having a conversation with an IC learn about their certainty and work to support it rather than undermine it. Agree with their base assumptions and then work toward conclusions based on emotional drivers that matter most to them.

The Point of Conversation

Put simply, I think the point of conversation is to pull people from their disparate quadrants on this scale and move them toward the center. The IC needs the SG to balance them. The SC needs the IG as balance. We need each other and the other’s way of thinking to balance our own. Skepticism is good until it’s not. Group-think is good, until it goes too far. Certainty helps us until it’s a hindrance. Individualism is valuable until it drives us apart.

What do you think?

Are these helpful categories?

Do they help us converse?

What did I miss?

Posted by James T Wood at 6:12 PM 2 comments: Links to this post