I'm immersed in fear, baptized by it.
I die within it, consumed.
Each plunge, each little-death wakes the old panic.
The beast struggles to live.
Bowel-gripping hands pull, grope and claw;
hope flutters away.

But I've done this before;
I've died this death.
Dying, I yet live.
But knowledge cannot eclipse pain.
Familiarity breeds connection.
I know full well the consequences, yet I continue.

Remembrance tells me I will rise again.
History declares the breath will come before I drown.
My fear has no scholar's memory.
For this moment, I'm drowning.
Posted by James T Wood at 6:12 PM 2 comments: Links to this post

Email ThisBlogThis!Share to TwitterShare to FacebookShare to Pinterest
Labels: poetry 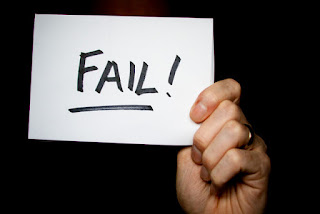 I've had a risky week. Over the last seven days I got a tattoo, went white water rafting, launched a fundraising campaign to publish a novel and jumped out of an airplane at 13,000 feet. The weird thing is that the most nerve-wracking part of all of it was signing the wavers. In particular, the phrase "active negligence" created some discomfort in my bowel region while I signed away my right to sue the people responsible for safely escorting me from an altitude of over 2 miles back to terra firma.

But without the risk of failure, there's no hope for success.

When the youngest female billionaire, Sara Blakely, was growing up, her father would ask "So, what did you fail at today?" Instead of encouraging the safe path, Sara's dad pushed her to failure. In doing so, he helped her to build up a tolerance to fear, so when it came time to launch her idea (Spanx), she did it. It worked.

I've talked a lot recently on Facebook about the possibility that I might fail in a huge, public and embarrassing way. I'm not trying to fail. That's not the point. But, if I do. It's okay.

If I'd died while jumping out of a plane or rafting or if my tattoo had become infected and my leg had to be amputated, that would be terrible. But I took calculated risks, despite the opportunity for catastrophic failure. I went with a tattoo artist I know and trust, I went with a rafting company that has a good safety record and I thoroughly researched the skydiving company before booking with them. I looked at the risk of failure and decided that the opportunity of success was worth it.

Now I'm in the midst of a 30 day risk with the fundraising campaign. With 25 days to go it's 28% funded. I know the statistics of how many projects will fail, how many will succeed and by how much. I know that right now I have about an 88% chance of success. Those are pretty good odds.

I could have fallen to my death from a plane.

Even though I know that it's about 200,000 times more likely that I'll die driving to the skydiving place than I will while jumping, there's still a chance I could have died.

That's why most people don't take risks. They avoid the dangerous. They hide from their fears. Because something bad could happen. Something could go wrong. And then when it does, they're proven right and become even more risk averse.

It's like continuing to wear arm-floaties in the pool, as an adult, because of that one time you almost drowned. You can stay in the shallow end. You can keep your floaties on and pull up your bloomers. But I'm going to be over in the deep end, getting water up my nose after a cannonball - or it might be a belly-flop.
Posted by James T Wood at 2:22 PM No comments: Links to this post