Why I Won't Watch "The Artist" No Matter What You Say 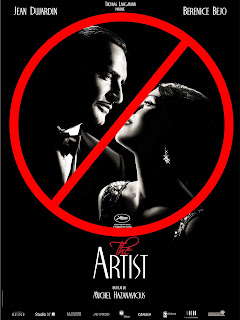 Two words for you: Citizen Kane.

The American Film Institute says that CK is the best film ever made. So I watched it. It's not. In fact, CK is one of the worst movies ever made. The story is unintelligible to anyone who isn't privy to the inside jokes between the director and his friends. If I wanted to watch an inside joke I could go to YouTube rather than sit through a couple of hours of mind-numbing garbage.

Which brings me to The Artist. It's a black-and-white silent film released in 2011 staring a Frenchman and it won Best Picture, Best Director and Best Actor at the Academy Awards. That all tells me that it's a movie made by film students, liked by film critics and awarded by other film students. Everyone wants to feel like they're on the inside, so they perpetuate terrible movies for the sake of "art."

Art doesn't have to suck. Citizen Kane sucked, but no one wants to admit it, so they all play along. It's like the revolutionary Jabberwocky Project. Guess what, I'm not falling for it. Not this time. I wasted hours of my life on CK and I won't do the same with The Artist. I know what you're going to say, "But it's so good." "Just give it a try, you'll like it." "All the critics can't be wrong." "But it won so many awards." "It's so well made."

I may run the risk of never seeing a fantastic movie. But did you ever think that you're running the risk of perpetuating a terrible inside joke because you're too afraid to call it what it is?

Email ThisBlogThis!Share to TwitterShare to FacebookShare to Pinterest
Labels: movies

Ignore it. It will pass like all other trends. You won't even remember why people were talking about it 2 years hence. Use the time for something productive, like brining more bacon and inviting me over to eat it.

Thanks for reminding me about what the world is really about.