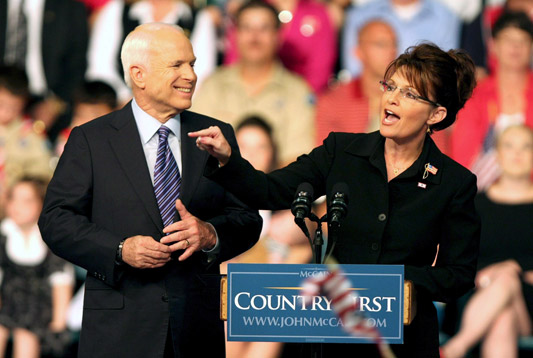 I'm wondering if this election will make history for votership . . . I feel like a lot more people are taking interest in what's happening. For the first time in my life I listened to the speech from a party convention.

Obama: His speech told me that he's a Democrat to the core. I had heard good things, but when he spoke I heard the same rhetoric as always - he's partisan, and is holding the party line on many issues. He railed on about how we need change in Washington, but he proposed doing so by continuing the old Democratic policies. I heard some good things from him to be sure, but most of it was couched in a diatribe against Bush which is a shallow, immature political tactic.

McCain: His Veep choice is a brilliant pollitical move. I think he is trying to court the disenfranchised Clinton suporters - I have to wonder how successful he will be. By bringing youth and feminity to his ticket he broadens his appeal. It doesn't hurt that she is an attractive woman because McCain isn't too easy on the eyes if you know what I'm saying. His platform isn't too bad, it's defintely not the "four more years of the last eight years" as Obama would paint it. I don't want be a one issue voter, but if he were to promise to privatize Social (in)Securty that would get me in a hot second. I am disgusted with Bush et al backing out on their plan.
Posted by James T Wood at 4:22 PM

Email ThisBlogThis!Share to TwitterShare to FacebookShare to Pinterest
Labels: politics

I've wondered what will happen with social security. I'm inclined to think that our country will financially collapse before a senator has the guts to step up and try to get rid of it. Too many voters are old people that draw SS checks. Who's going to step up and directly take something away from the folks that put them in office? Then again, we can't keep giving money away like we are.

But not hot enough to make me vote.

Good analysis of Obama by the way. Charismatic, yes. Sincere, quite possibly. But he's really just another Democrat. Nothing new here. Though I will say I really appreciated his refusal to attack Palin's family over the pregnancy issue. He was very classy about how he handled this.

Lori pointed out the other day how McCain's choice took over the news focus from Obama's speech.

However, it is interesting how the next few weeks will determine if this was a wise choice or not.

If McCain wins we are one heart attack or PTSD from having a female president in her forties whose highest political standing has been governor of Alaska as our president.

If Obama wins, we're not even one heart attack away from having a male president in his forties who has no experience in the executive branch of government, and who has spent better than half of his brief time as a senator campaigning to be President, rather working as a Senator. :-)

Mark, I didn't say anything about voting or Obama.
I was just making an observation.
I don't foresee me supporting any president because of a vice-president. (Unless it was Lou Pinella).
Also, I don't vote based on experience. I vote based on issues I find important. Thanks for your thoughts.

This has really been a fascinating election. I have honestly seen a lot about both candidates that impresses me.

The choices of the VP candidates has really added a lot of depth to the process, I think. I generally don't like politics, but I love thinking about strategies. The choices that have been made, along with the timing of these choices has really gotten me excited about all of this.

Jake Shore said...
This comment has been removed by the author.
6:38 PM CDT

At least Bush tried to get it passed. The Democrats, led by the venerable Ted Kennedy, told every voter over 50 that Bush was trying to enact a "risky scheme" to take away there Social Security, and effectively killed the bill. Nevermind that Bush's plan wouldn't have affected anyone over 40.

Does anyone our age really think we're actually going to have social security? If you do, you should read some articles or books by Phillip Pullman.