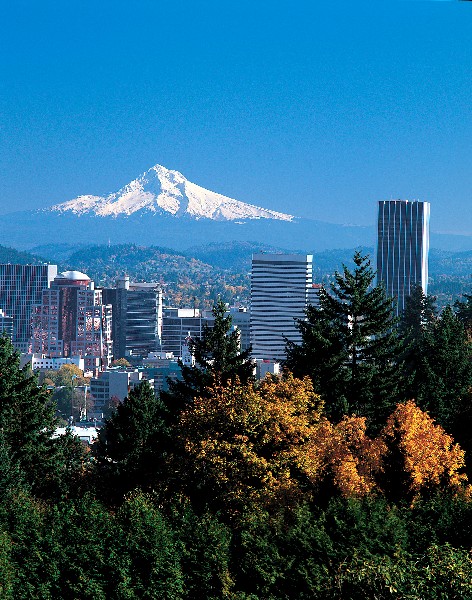 I'm back from my trip to Memphis. I had a great time and tried to fill every spare moment with friends. There are so many people that I couldn't see everyone that I wanted to see, so I'm sorry if I didn't spend enough/any time with you, it's not for a lack of desire, just a lack of time and resources.

Most of the conversations I had were about what Andrea and I are doing now and how we like living in Portland. Well, we like Portland a lot, a whole lot. But we're not alone in thinking that Portland is an awesome place and I thought I would share just a few of the praises lavished upon my town.

Delta Sky magazine ran an article about the city in which they said:

There’s no way to spare you the litany of Portland’s recent “bests.” In the last three years, for example, Grist magazine called us the second-Greenest city in the world, while MSN.com’s City Guides puts us among the 10 Greenest cities in America. OK, we’ll have to try a little harder. But we grabbed the No. 1 spot on SustainLane.com’s 2006 list of America’s most sustainable big cities, Men’s Journal called us the best place to live in the United States, Prevention (and the American Podiatric Medical Association) in 2006 called us the best walking town in America, and Bicycling says we’re the best cycling city in America. I could go on. OK, I will. Outside magazine ranks us as one of the 10 perfect towns that have it all. No less an authority than Reader’s Digest says we’re America’s cleanest city. And Frommer’s Guidebooks listed us as one of the world’s top travel destinations for 2007.

In an article on Northwest Cable News they pile on the accolades:

I could continue, but I think this suffices in making my point that . . . Portland Rocks! So you should come and see us.

Email ThisBlogThis!Share to TwitterShare to FacebookShare to Pinterest
Labels: Portland

I'm sorry I was feeling poorly when you came to our house...I did love my hugs though...maybe we'll have more time next time!

I get it James, I already told my bosses I'm moving back.

Yeah...Rich. You need to move back.

I keep moving awayjust to come back. Remember when I moved to Canada?