I've been sick lately, so you'll just have to be satisfied with this. Note how robots are trying to look cute, so as to allay our fears . . .

Posted by James T Wood at 6:27 PM 4 comments: Links to this post

So the folks over at UCLA did a little study on the brain activity of political liberals and conservatives. They asked people who consider themselves to be very conservative or very liberal to participate in a study which measures the difference between reaction and habit. Read the article if you want more information.

"Exploring the neurobiology of politics, scientists have found that liberals tolerate ambiguity and conflict better than conservatives because of how their brains work.

Previous psychological studies have found that conservatives tend to be more structured and persistent in their judgments whereas liberals are more open to new experiences. The latest study found those traits are not confined to political situations but also influence everyday decisions.

The article goes on to say that there can be no value judgement between the different thinking styles - both have their strengths and weaknesses. This may, however, explain why it is so difficult for liberals and conservatives to agree. Where do you find yourself on this spectrum? Does this explain how you think & vote?
Posted by James T Wood at 11:52 AM 7 comments: Links to this post

Where do I belong? 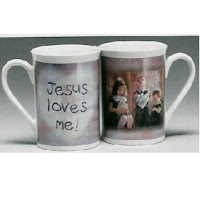 So I'm sitting in a Christian coffee shop (free wi-fi = good) and working on some homework and stuff. As I'm sitting here I realize that I feel pretty out of place. They're piping Jesus-music over the speakers and they have autographed pictures of Jennifer Knapp and Third Day up on the walls. I remember a time when this would offer me a comfortable feeling, knowing that I'm surrounded by my "own kind". But now I'm not one of these people.

The odd thing is that I don't feel totaly comfortable in a "secular" environment either. I wonder if that's how I'm supposed to feel - never comfortable anywhere, really. That reminds me of a conversation I had recently about living life like a missionary. Maybe that's a part of the problem with North American Christianity - we've made it our goal to be comfortable, when all along we should be living like our comfort doesn't really matter that much. I don't know really.

Note: I really hate the use of the term "secular". In my experience it's used by Christians to demonize and denigrade anything that is not produced by Christians (e.g. secular-music). I think what pisses me off the most is that by calling the other stuff "secular" it makes the assumption that what is left is "sacred" as those are the only two possible categories, and I'm not ready to label much of the product of the Christian Corporate Machine as sacred. I think that category should have more meaning and power.
Posted by James T Wood at 12:38 PM 4 comments: Links to this post