What are you doing on Friday?

According to this website this is what I would look like as a character on the Simpson. You would think they're trying to raise simpsons awareness or something. It's almost like there is something happening this week that relates to the Simpsons in some way. 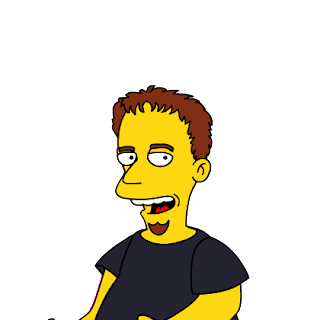 Posted by James T Wood at 2:14 PM 4 comments: Links to this post

Email ThisBlogThis!Share to TwitterShare to FacebookShare to Pinterest
Labels: simpsons

Even though it has been a while since I've posted about robots, there are still people who know of me through my blog--and they only know me as the 'robot guy'. Well, in order to maintain my world fame, here's a little bit more coverage of the rise of the machines - beware . . . er . . . something.

First up: Soccer (a.k.a. futball) will soon be ruled by the machines, and since we know that 95% of the world lives and breathes 'futball' this will spell the end for every nation except the good ol' USofA. I have to wonder if the unexplainable popularity of soccer is in fact due to the plans of the machines. Good job America! Don't give in to their plotting, we may yet survive to power the machines with our BTU's!


Finally, the Australians have made it clear that the mob will soon employ robots to dominate the world. I can't say it better than the article itself:

So, I spent some time looking in to the major questions posed by atheists to theists. They usually take the form of questioning reality in light of the nature of God. So: If God is so good, why is their pain and suffering? Or: If God is all knowing, then how can we have free will?

So, here's my problem: these descriptions of the nature of God do not come from Judeo-Christian teachings, but from Neo-Platonic philosophy and other external sources. Way back in the day when Christianity was trying to find its own place in the world a guy named Justin talked about how much Christianity lines up with the teachings of the great philosophers. He did this so that Christians would face less persecution and as a way to try and convert his peers. The problem is that he began the process of integrating this pagan philosophy with Christianity and we're still dealing with the results.

So these philosophers said that the ultimate creator god was unchangeable, all powerful, all knowing, etc. And these ideas were applied to the Christian God early on. The problem lies in the fact Yahweh never presents himself in these terms. Yahweh is jealous and forgiving and loving and creative and angry and merciful - far from being unchangeable. Yahweh is limited in power - either due to his own choice or due to his nature or some unknown other reason - it is clear though that there are things that Yahweh cannot accomplish. Yahweh has limited knowledge - he knows far more than humans do, but it is not clear that he knows what we will choose or exactly how the future will unfold (though he has a much clearer idea than we do).

I could go on, but then I think people would get bored and stop reading. I'll stop now and let the arguments begin.
Posted by James T Wood at 12:46 PM 4 comments: Links to this post

I don't know what to say about this. Movie branding at a whole new level. You would have to go to Seattle or San Francisco to find one near you.