If it's true that pomo's reaction to mo isn't really a worldview - then what is? I mentioned in my previous post that pomo might be akin to the wilderness wanderings of the Israelites after they had left the slavery of Egypt but before they made it to the promised land of Palestine. So, I want to think a little bit about what the "promised land" might look like.

For my part I’m not sure that the reaction to or deficiencies of a particular worldview can necessarily predict the nature of the worldview that is yet to come (a.k.a. I’m not going to try the first two ways). I think our history has a lot to tell us about our future. The last time in history where there was a huge shift in worldviews (like McLaren et al are suggesting we are going through now) was the Reformation. What was going on during the Reformation that is similar to life today? Church life? World politics? Scientific thought? Maybe, but I don’t think so.

I think that the major similarity between the Reformation and today is the advent of a major change in the way that humanity uses language. Check out the snazzy graphics: 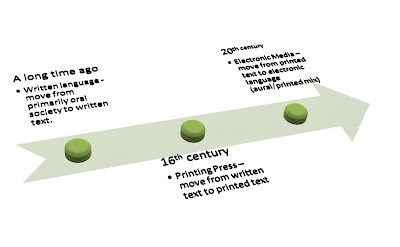 Now, if you’re not swayed by my astounding cgi skilz, I will attempt a cogent argument (a.k.a. blah-blah-blah). Thought and language are inextricably intertwined (maybe even equivalent). Way back at the beginning people had only oral language. Then not-so-far-back in the other-day some smarty-pants invented writing (spam came about 10 minutes later). Then between brats and beers, Gutenberg managed to crank out a printing press. So, the change in language from the written word to the printed word radically changed the way that human beings use language, which changed the way that we think. The advent of the internet has (thank you, Al Gore) produced a similar change in the use of language. Therefore, the changes in thought that we see are less about philosophy (postmodernism) than they are about the tie between language and thought.

I have some thoughts about what all this means, but I want to hear from you first.

Do you agree with my premise?

How does this language shift align with pomo?

How does it go beyond pomo?

If this is true, then what will the “promised land” look like?
Posted by James T Wood at 5:53 PM

There's the rub, it might turn out any number of ways, or maybe we can go on wandering for centuries before we are reduced again to a mo despotism. Maybe our problem is that we want an overarching worldview even though we are a culture of divided subcultures. I get the feeling that our current trend is toward a compartmentalization of fields within academia based upon pragmatic concerns (each field seems to be claiming its own methods of reasoning because "it works" to advance the field). Perhaps this trend will also overtake the general population, as academic trends often do. I'm not a big fan of pragmatism, 'cause it ignores sources of knowledge that do not obviously lead to advancement.

Of course, compartmentalization does not qualify as worldview, though each of its compartments might. I suspect that the current process will result in fragmentation, no matter what particular form it takes. I suppose there is the similarity with the reformation: the changes that took place were largely unavoidable and produced freedom, progress, and the fragmentation of Western Thought. Another similarity is that the Reformation was largely a reaction to abuse of power and pomo seems to be a reaction to claims to power based on objectivity.

Here are a few texts that you might want to consult (most I've read but some I've yet to get my hands on):
On the Future of History: The Postmodernist Challenge and Its Aftermath and We Have Never Been Modern(there may be an edition already in print), I have yet to read, but look like they might offer some preliminary suggestions. First, though, you might dust off _Texts Under Negotiation_ and read it again, now that you can understand it (the first two chapters at least), then maybe familiarize yourself with some of the trends in the compartments that we can already identify: try to get your hands on the Norton Anthology of Theory and Criticism and read Gayatri Spivak, Hayden White, Michael Foucault, and maybe a few others from categories about which you've been curious. Read the introduction to a Rorty book, and maybe one by Ricoeur or the intro to _Knowledge, Fiction, and Imagination_ by Novitz. They won't tell you everyything, but my experience reading about pomo tells me that most of the people dealing with pomo ignore or gloss over these compartments, even though they seem to represent the direction of academic thought and, therefore, the future of cultural thought.

Dude, that's jacked! I'm supposed to be writing papers and you tell me to go and read more books!?

But seriously, I admit to needing to read some more on the topic (I found the Breuggemann text on my shelf the other day and I was impressed by what Dr. Jones had us reading). Unfortunately, that reading will be in the future.

I think you may be on to something here. Pomo cries out against the intellectual segregation of mo and advocates wholism. At the same time pomo's pragmatic approach lends itself to an even greater compartmentalization. The fun thing is that a pomo can see and accept that contradiction without feeling the need to do anything to change it.

Based on my thesis (that the shift from print media to electronic media is at the heart of our worldview shift) I propose that the compartmentalization started by mo and continued by pomo will result in a micro-compartmentalization. It won't occur within disciplines, but within people. In the same way that we use different language and thought processes when we're blogging vs. writing papers vs. text messaging, these compartments will get smaller (and perhaps more distinct within each person).

It seems that maybe the Rennaisance might represent our shift today. The Reformation was a response to this--so what would be our response?

Something I have been thinking about...totally unrelated to your cool history lesson...is this:

Ultimately, you can be a pomo, progressive Christian all you want...that's awesome! Great for us! I am too!

But we have to remember that, "...from now on we regard no one from a worldly point of view. Though we once regarded Christ in this way, we do so no longer. Therefore, if anyone is in Christ, he is a new creation; the old has gone, the new has come!" 2 Corinthians 5:16-17

Ron,
That's a good point and a great place for some further ponderifications (sp?).

One thought: in medeval Europe the culture was not too far separated from Christianity. Could it not be said that for their context the changes were one in the same?

I do think we need to spend some time thinking about how the rise of electronic media has/will affect Christianity and the way that the church interacts with culture.

When Luther wrote his famous (or infamous) 95 theses they weren't nailed to the door, but quietly circulated among some of his scholarly friends. One of them saw the power in the words and and had thousands of copies printed up. Without even knowing about it Luther was launched from a questioning theologian to the forefront of a Reformation.

Are we being swept along in the same way?

Thanks for the reminder. The danger of all this fancy-book-learnin' is that we might forget the One who makes us new every day. It's good to stop and recall that God is beyond our small philosophies and reformations. May we glorify him with what we are becoming.