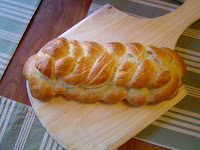 I learned how to make Challah (חלה) which is Jewish Sabbath bread. This is the bread that they would bake on Friday to eat on the Sabbath. "The term challah actually refers to a small piece of dough—about the size of an egg—which is separated from the main quantity of dough" and intended to be offered to the priests. Since the destruction of the temple in Jerusalem this piece has been burned.

Our LIFE group shared this bread on Sunday night. We passed around the loaves and broke off chunks (as the Jewish Christians would have done on the Sabbath). We also shared watered down wine, similar to what they probably had two millenia ago. When it says that they blessed the bread it probably means the traditional blessing: "Baruch atah Adonai, Eloheinu Melech ha'olam, hamotzi lechem min ha'aretz." Translated, this means, "Blessed are you, Lord our God, King of the universe, who brings forth bread from the earth".
Posted by James T Wood at 12:28 PM

That is really neat! Now when are you going to start making it for the whole congregation...Bet John Mark would approve!