Third places need to be accessible to people both geographically and temporally. If you have to drive 30 minutes to get there then you won't do it very often. If it's only open when you're at work then you can't go there. Pretty simple stuff.

One quote stuck out to me, "the activity that goes on in third places is largely unplanned, unscheduled, unorganized, and unstructured. Here, however, is the charm. It is just these deviations from the middle-class penchant for organization that give the third place much of its character and allure . . ."

Does that appeal to you? How can the church take part in this? Isn't all the unplanned stuff antithetical to ministry (joke intended)?

The main product that makes a third place a third place cannot be purchased. It is the regulars that make or break an establishment. The regulars are the people who make up the community of a third place. They are the people that converse and play and help one another. But how does one become a regular? Trust must be established through regular attendance and "fair play". Oldenburg uses the analogy of sandlot baseball: the players that show up consistantly and play a decent game are accepted. I love the way he boils it down, "Mainly, one simply keeps reappearing and tries not to be obnoxious."

Isn't that hard, though. I want to just show up and be accepted right away. I don't want to take all the work of showing up for a long time so that I can be accepted. I guess good things take work.
Posted by James T Wood at 4:21 PM 3 comments: Links to this post

I'm feverishly studying the Pentateuch (the first five books of the bible) this week. I'm in class 8 hours a day this week so I don't have a lot of time for the ol' blog-munity-o-sphere-ville-erton-burg. I will resume the addiction later.
Posted by James T Wood at 10:43 PM 7 comments: Links to this post

I got this from Big Mike. You should check it out.
What's your theological worldview?
created with QuizFarm.com
Posted by James T Wood at 1:07 PM 7 comments: Links to this post

"Neutral ground provides the place, and leveling sets the stage for the cardinal and sustaining activity of third places everywhere. That activity is conversation."

The primary activity in the third place is conversation. The conversation is lively and filled with wit and humor and passion. People are free to express themselves democratically; that is, no one's words are valued more highly because of their rank or position.

The unwritten rules of the art of conversation (ironically written down) are:
1. Remain silent your share of the time (more rather than less).
2. Be attentive while others are talking.
3. Say what you think but be careful not to hurt other's feelings.
4. Avoid topics not of general interest.
5. Say little or nothing about yourself personally, but talk about others there assembled.
6. Avoid trying to instruct.
7. Speak in as low a voice as will allow others to hear.

To me this is the first of the characteristics of a third place that cannot be fulfilled (completely) online. The internet offers an odd hybrid of corespondence and conversation (converspondence? coresation? - but I digress). E-mails and blogging and instant messaging cannot replace conversation. They cannot be as dramatic or humorous or engrosing, nor can they be as boring and tedious. Researchers say that 93% of communication is non-verbal.

"There's no emoticon for what I'm feeling." ~Comicbook Guy (from the Simpsons)

Posted by James T Wood at 3:47 PM 9 comments: Links to this post

A Third Place is a Leveling place.

"A place that is a leveler is, by its nature, an inclusive place. It is accessible to the general public and does not set formal criteria of membership and exlusion."

This leveling brings a joy that is not available in any other way. Because "worldy status is not the only aspect of the individual that must not intrude into third place association. Personal problems and moodiness must be set aside as well." If only for an hour or two the problems of work and home are irrelevant. One's purpose is to have fun and enjoy the company of others.

So maybe it's not a bad thing to go from work to a pub before going home. Rather than moving from one set of problems and hierarchies to another, one can have a respite. Ok, so I'm not advocating people spending hours and hours away from home and family, nor am I saying that it is good to drink to avoid problems. I'm just trying to re-examine the vilification of 'going out'.

How do you find leveling in your life? Do you find it at all? Is it all it's cracked up to be?
Posted by James T Wood at 4:25 PM 9 comments: Links to this post

Some dude has way too much time on their hands.

I really dig these pictures. They are just freaky enough to still be cool.

Ray Oldenburg wrote The Great Good Place, a book detailing the dearth of and need for what he calls "Third Places". The first place is home (where you are most comfortable and spend the majority of your time), the second place is work (where you spend the next largest portion of your time), the third place is where you go when you aren't at home or work. Third places are almost non-existant in the suburbanized city. Zoning laws prevent any local communal gathering place. One must get in their car and travel to such a spot, and that very fact removes that spot from the community and prevents it from having 'regulars' who get to know one another.

The first charecteristic of a Third Place is that it is Neutral Ground. No one is in charge, no one is the host, no one is the guest. The most important aspect of neutral ground is that it affords friends a way to spend time together without becomming "uncomfortably tangled in one another's lives." Having a neutral ground allows friends to come together and leave each other with ease. You don't have to invite people over for dinner just to talk to them. Oldenburg says, "we need a good deal of immunity from those whose company we like best."

This makes a lot of sense to me. I was puzzled why my friendships seemed to dwindle after moving off of my college campus - now I know. On campus I could just see someone in the Student Center or the dorm loby and hanging out would ensue (I remember the nightly Simpsons viewing - always a different crew, always regulars). But moving off campus meant that friends now have to either come over (a commitment to being on my turf) or they have to invite me over (a commitment to be a host). The number of people who are willing to do that is much smaller than the number willing to engage in light conversation durring the comercials of a Simpsons episode or to play a game of pool while we wait for dinner.

I'm captivated by the secrets that people will share. I'm amazed by the poetry and art of pain and shame. I'm heart-wrenched by the depth of hurt and dispair. You have to see Post Secret: a website where people can send a postcard with their deepest secrets. 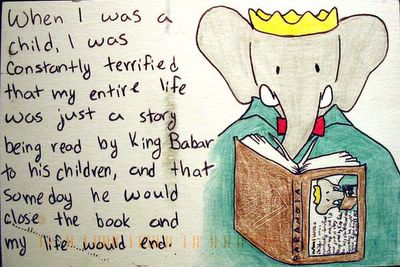 Ok, this is just stuff that I find interesting:

Slashdot reports that blogging can be a paying gig.

No more carpal tunnel with this fun toy.

I know someone who's birthday is coming up . . . a little mind-control-transparent-film-paid-blogging would be a nice present . . .

I forgot to mention the free donuts on Friday.
Posted by James T Wood at 10:22 AM 1 comment: Links to this post